Having strong feelings, spending a considerable amount of time together, having sex, meeting the parents, etc. are not indicative of exclusivity. You go to the movies, meet for happy hour and have even gone on a few quick weekend trips. It’s the perfect relationship until you find out he is also having that type of fun and intimacy with someone else. You think about all the time and emotion you’ve invested and you’re disappointed in what you ended up with.

One thing that I learned very quickly during my early dating experiences as an adult is to never assume anything — especially when it comes to exclusivity. When you’re under the assumption that he is seeing only you, you’ve already set yourself up for major disappointment. I don’t know about you, but I want to make sure that my person of interest is on the same page as I am BEFORE I take my heart from under my  Spanx® and put it on my sleeve.

Think of it like this: You wouldn’t assume that you have a full tank of gas before you and the girls make that six hour drive to D.C. would you? Of course not, you would check your tank to ensure you can get to your destination without getting stranded. Same thing goes for assuming when you’re dating someone. When you assume exclusivity, you risk being stranded; stranded 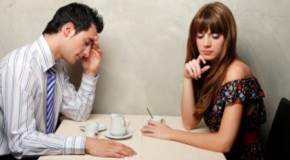 with your emotions left out there with no certainty of the end result. When you know from the beginning that the person you have interest in is dating other people it allows you to “fill-up your tank” with the appropriate emotions so you don’t get stranded during your dating journey. In other words, don’t put all your lip gloss in just one hobo.

Here’s the bottom line, if you’re dating someone, take it for what it is: DATING.  A lot of times we women choose to invest our time in someone who won’t even verbalize commitment, which makes no sense. Granted, it is easy to get wrapped up in the assumption of exclusivity when he makes you feel good, but you can’t let your heart do all the leading ALL the time. No matter how good you feel, that doesn’t change the fact that he may being seeing someone other than you (and that’s okay if you can handle it). Feelings have no relevance when it comes to knowing if you’re exclusive or not. Period. The ONLY way to know where you stand is to ask. Trust me, you won’t seem like Thirsty McJackson if you ask him if he’s dating someone else. Ideally, the “Are-You-Dating-Other-People” question shouldn’t be brought up after your first martini. But it should be brought up in one of your conversations sooner than later. If he says no, take his word for it and don’t-over think things. If he says yes, props for the honesty and don’t over-think things. Regardless of the answer, it’s still vital to keep the lines of communication if things change.

The best way to not fall into the assuming exclusivity trap is to set boundaries and expectations for your dating relationship. No matter how much you like the person you’re dating, don’t provide them with boyfriend/girlfriend perks if you’re not exclusive. Perks are extremely subjective and are not one-size fits all. For example, a boyfriend perk for me is sex. If we are not exclusive with one another and we have not made a commitment to be, it’s not going to happen no matter how good he looks in a suit. This perk may not be realistic to some people, which is totally understandable, but know ahead of time what limits you’re going to set for yourself when dating. Setting limits makes it easier to walk away from a dating relationship that’s not conducive because you know upfront what you’re willing and not willing to do. A lot of times we’re so busy trying to figure out what the person we’re just dating will do for us, we forget to truly assess the things we will and won’t do for them. I assure you that once this is done, the thick line between exclusivity and dating will be much clearer.

Muffie Bradshaw is an award-winning relationship blogger and coach who has been seen on The Steve Harvey Show. Other works include online magazines including, but not limited to, singleblackmale.org and womensforum.com. With many relationship experiences, including breakups, dating successes and disasters, Muffie knows firsthand the mistakes women should avoid when going through the ups and downs of dating. Through her writing and coaching services, Muffie specializes in helping women reach a higher level of understanding regarding their dating lives through self-assuring decision making techniques, self-reflection and cognitive behavioral therapy (CBT) inspired methods.